Alfa Romeo’s North American comeback started with the introduction of the 4C last year. Now, the automaker is bringing more of Turin across the Atlantic with the re-introduction of the Giulia sports sedan. This is a rear-wheel drive beauty that packs 505 Ferrari stallions under its hood and sprints to 60 miles per hour in less than four seconds, continuing on to a top speed of nearly 191 miles per hour.

The new 2017 Giulia Quadrifoglio has the same design creed as its predecessor from half a century ago. It’s a relatively simple, contemporary sedan in look but the details bring out a lot of style. The carefully shaped saloon hood bears unassuming lines of adornment which further the wineglass V of the grille back to the hood. Slitted headlights look out from the corners over air scoops that forego bezels in favor of body shaping edgework. The Giulia has sensuous and shapely sheet metal, and—like a good Italian—the curves and creases are in all the right places.

Simple vents behind the front wheel wells offer a hint at the performance under the hood, belying the simplistic sport coupe sedan styling. The rear wells flare out slightly to give notice of the rear-driven powertrain and wide exhaust openings on either corner finish the muscular touches. 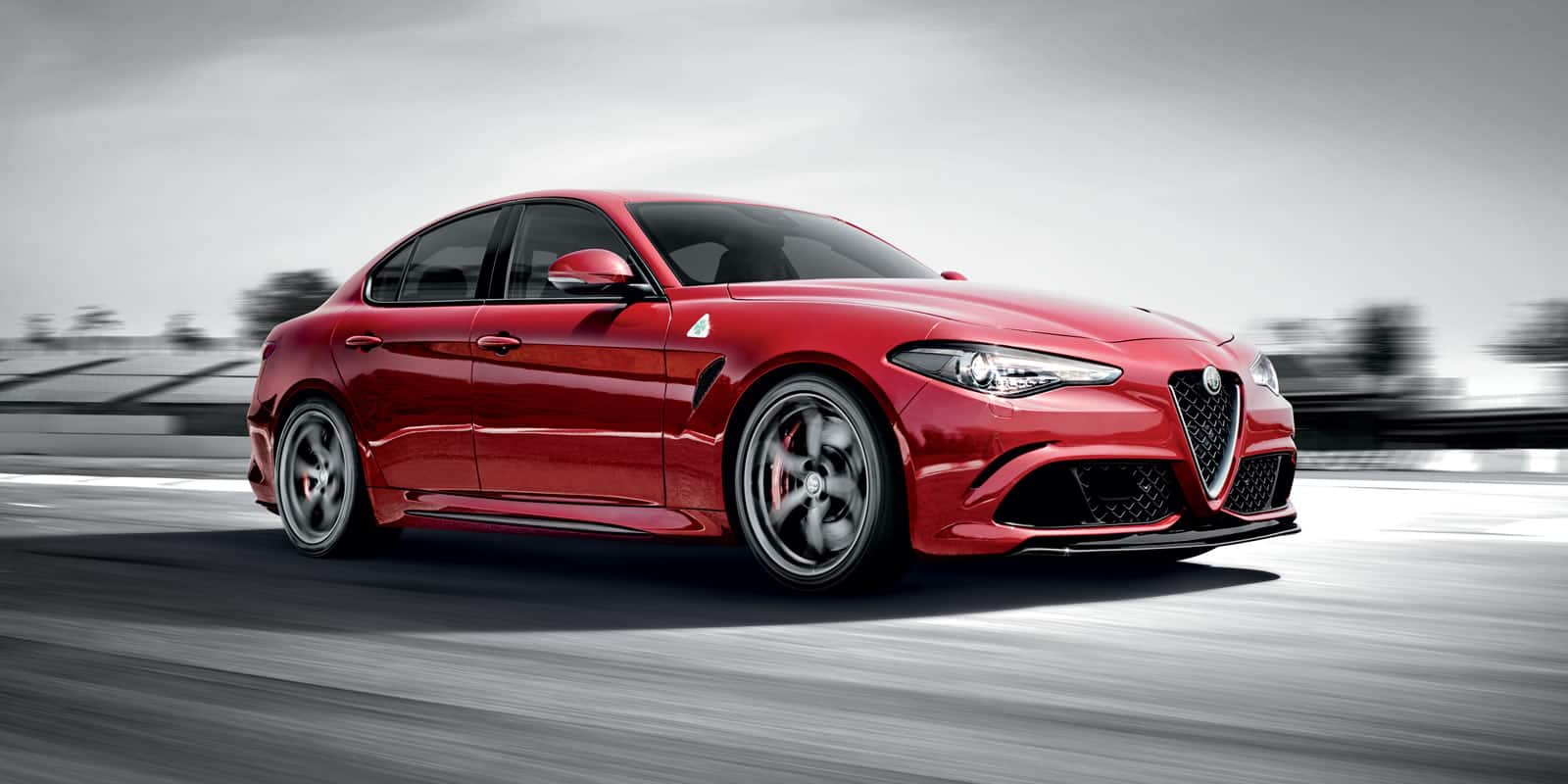 Underneath the hood of the 2017 Alfa Romeo Giulia Quadrifoglio is a powerful 505-horsepower bi-turbo, 90-degree angled V6 derived from a Ferrari design. This will be the most powerful Alfa production car to date. The 2.9-liter V6 offers those 377 kilowatts of output with 443 pound-feet of torque (601 Nm) to match. That’s all thanks to the bi-turbo kicking out a peak 35 psi at peak. A short-shifting six-speed manual transmission is available, giving the car a 0-60 mph (0-100 km/h) time of just 3.8 seconds and a top speed of 191 mph (307 km/h). This car did the Nurburgring in a record-setting 7:39 lap.

Despite that powerful engine, Alfa Romeo assures the world that this is also a fuel-efficient sedan. Cylinder deactivation, which lowers the six to three, and engine stop/start reduce fuel consumption in everyday driving. A variable pressure oil pump also reduces drag, improving efficiency. 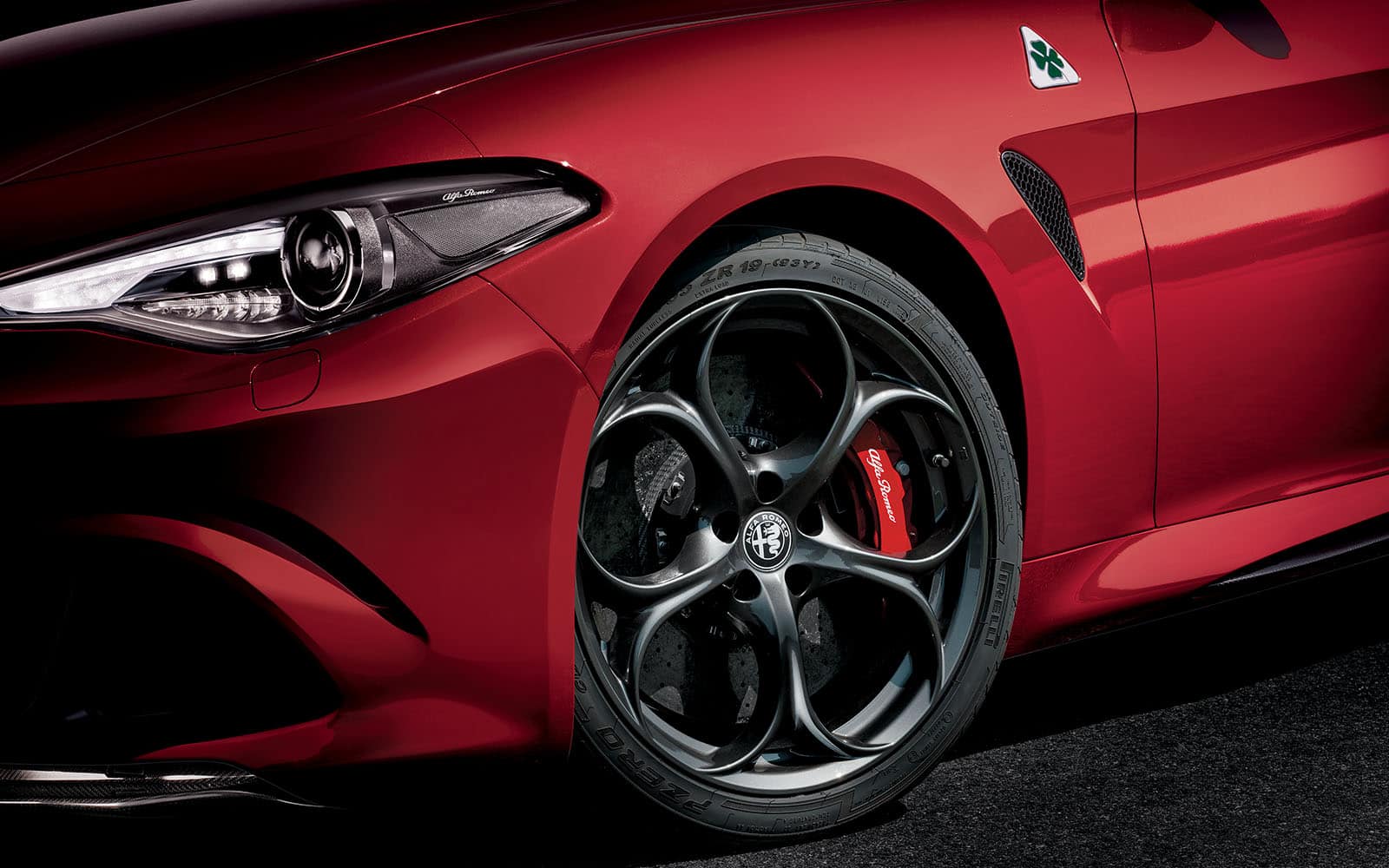 If breaking Nurburgring records isn’t your thing, then Alfa Romeo will also be introducing an all-new 2.0-liter direct injected four-cylinder turbo for the Giulia. This will produce 276 hp and utilize Alfa’s parent company Fiat’s MultiAir2 system, which controls compression ratios for efficient performance. The four-cylinder turbo will be offered with an all-wheel drive powertrain as well.

Other key technologies offered on this new Alfa Romeo Giulia include:

To finish things off, a full suite of safety technologies will be offered in this luxury sedan. The Giulia Quadrifoglio will have forward collision warning at all speeds, adaptive cruise control that includes full-stop capability, and lane departure warning with return correction. These go along with blind spot monitoring, rear cross path detection, and park-assist sensors at front and rear.

The 2017 Alfa Romeo Giulia Quadrifoglio will be built in the Alfa Romeo Cassino plant in Frosinone, Italy. It will begin production in late 2016 and enter North American showrooms by end of year. Expected manufacturer’s suggested retail price will start at about $70,000.